* Post contains affiliate links. As an Amazon Associate I earn from qualifying purchases.

Looking for research on weighted vests that backs up the therapeutic claims?

Like weighted blankets, research studies on weighted vests is limited. The good news though, is that some does exist. Let’s take a look.

Similar to a weighted blanket in how it works, a weighted vest applies therapeutic deep pressure touch (DPT) on the body of the user. As this study shows, occupational therapists have used DPT for some time, as a way to help children with autism, or hyperactivity, calm down.

Whilst weighted blankets are often useful as a sensory aid for sleep, weighted vests are usually recommended to help children focus, calm down or transition better from one activity to another.

Here’s a summary of some key studies that suggest weighted vests may have benefits for children (or adults) with autism, as well as anxiety, ADD, ADHD and sensory processing disorders.

This 2015 study (PDF) followed 50 participants aged 18-35, a quarter of whom were being treated for anxiety, depression or ADHD.

The research found that weighted vests decreased stress and helped to promote a sense of calm in participants and noted, specifically, that deep pressure input may be:

…an appropriate therapeutic modality to use with people with difficulty with arousal regulation and sensory modulation during or in preparation for functional tasks.

…useful for reducing maladaptive internalizing and externalizing behaviors, increasing attention to task, and reducing impulsivity, all of which would support the client’s ability to successfully perform daily life activities and engage in appropriate social–emotional, motor, and organizational tasks.

This weighted vest study, from 2011, followed 30 students with ADHD.

The research found participants, who wore a weighted vest in a classroom environment, demonstrated notable improvement in a number of areas. These included improvements in both behaviour and task focus.

The weighted vests improved the in-seat behaviour and attention to task of learners diagnosed with ADHD in a classroom context. (source)

Use of weighted vests in pediatric occupational therapy practice (2004)

This 2004 study set out to investigate paediatric occupational therapists’ experience with weighted vests and their impressions on whether weighted vests have a positive effect on children’s behaviour.

The survey included a random sample of 514 paediatric occupational therapists. The response rate was 68%.

Therapists, who responded, reported using weighted vests with preschool and young elementary school-aged children diagnosed with autism or attention deficit disorder. From the responses, it was concluded that:

Staying on task, staying in seat and attention span were the most common behaviors that therapists reported improving when weighted vests were used.

In 2001, a study, published in the American Journal of Occupational Therapy, examined the effectiveness of using a weighted vest for increasing attention to a fine motor task, as well as decreasing repetitive self stimulating movements (e.g. rocking, spinning objects or hand flapping etc).

The study group was preschool children with delays in social and communication skills.

The research concluded that:

During the intervention phase, all participants displayed a decrease in the number of distractions and an increase in the duration of focused attention while wearing the weighted vest.

Although the study was a small one, a notable takeaway was that 3 of the 4 students often asked to wear the vest outside of the research trials. 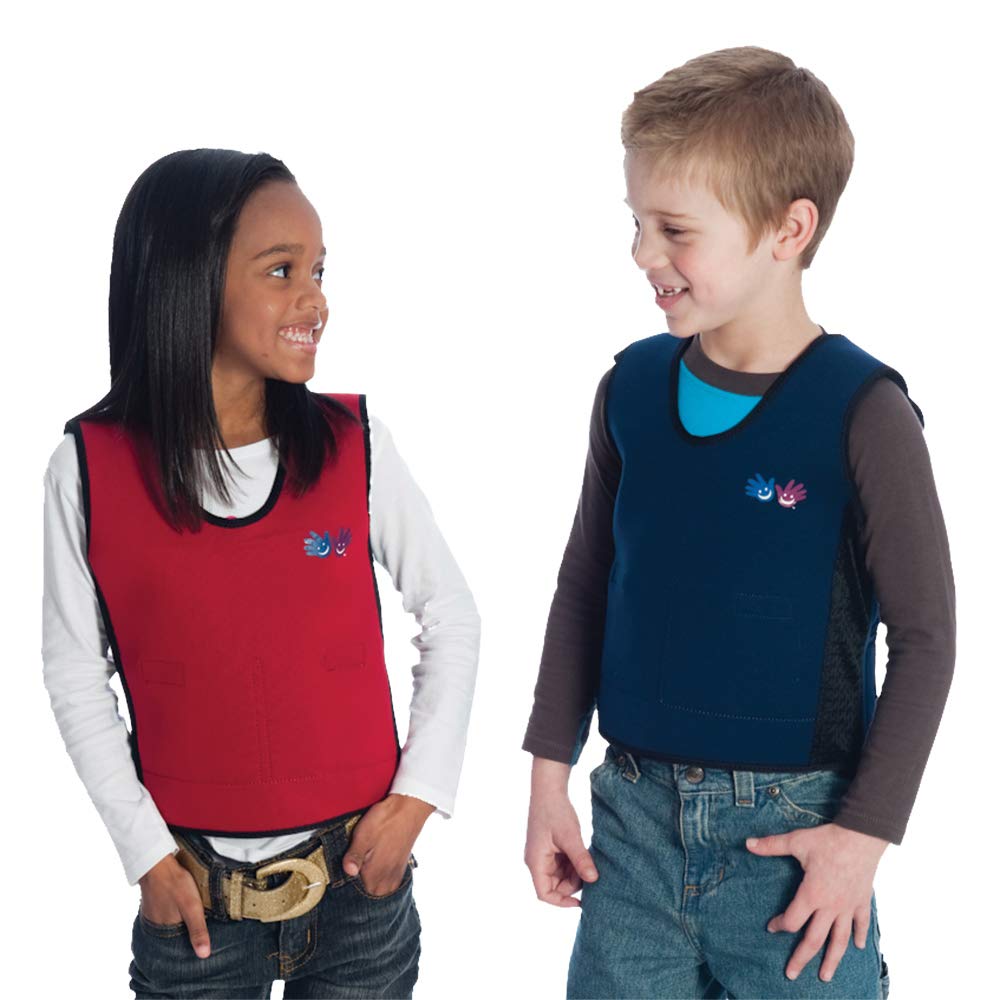 Deep touch therapy, via weighted vests, has been used by therapists, for some time, to help children with autism and attention deficit disorders calm down and focus better.

However, whilst some exists, there’s currently limited weighted vest research to scientifically back up the claims. Of the weighted vest studies that do exist, some also have small controlled trials.

However, as with most complementary or ‘alternative’ treatments, evidence and support within the medical community is often mixed and studies often few and far between.

So whilst it’s clear more research on weighted items is needed, there’s nonetheless a growing level of support and scientific evidence to suggest deep touch therapy has a calming effect on the brain and nervous system.

The studies above, plus personal testimony from many occupational therapists, also suggests weighted vests may hold real benefits for children with autism and associated disorders.

Always seek advice from a registered therapist, or healthcare professional, when considering a weighted vest for you or you child.

Welcome to Weighted Blankets For Kids – a resource for people seeking information on weighted blankets for children (& adults) with sleeping issues, autism, ADHD, SPD or anxiety.

Content on Weighted Blankets For Kids is for information purposes only & not intended or implied as a substitute for professional medical advice, diagnosis or treatment. Always consult a medical professional regarding any health condition or before using a weighted aid for treatment of a specific disorder. Read full disclosure.

By continuing to use the site, you agree to the use of cookies.Ok